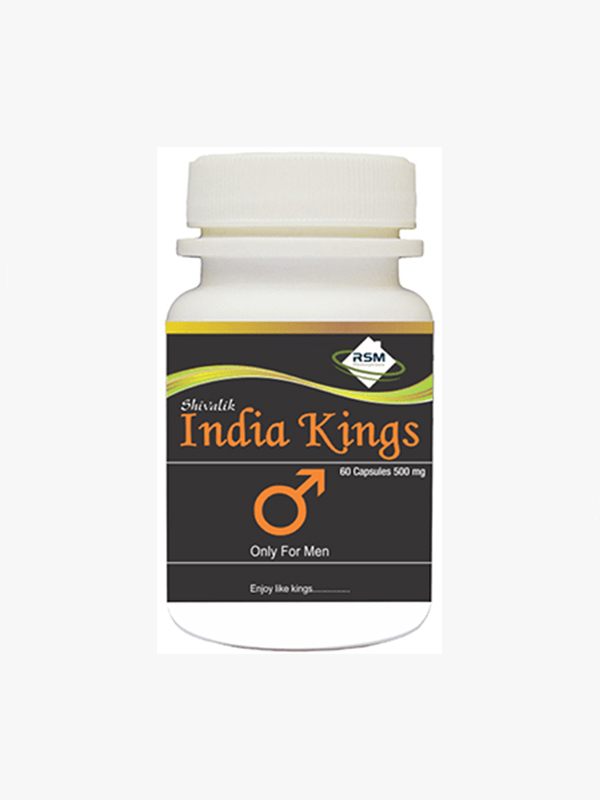 India Kings medicine suppliers & exporter in Chandigarh, India. The great Indian sages have written great books on sex & sex positions like Kamasutra & Tantra. In these books they have described in length the natural powers of herbs to last longer in bed so that a man could enjoy many women without concern over his loss of semen. This attitude probably reflects the prevailing sentiments of the age in which Kings & Nobels spent most of their time in Harems. The kings and Nobels were much concerned about their potency and employed many sex experts. These experts competed with each other to create more potent aphrodisiacs from precious herbs & rasayanas so that their kings could last longer in bed.

Made from specially formulated proprietary blend of natural ingredients such as:

Ashwagandha ( Withania Somnifera): Ashwangandha is recommended in the ancient Kama Sutra for heightening sexual experience, Ashwagandha is one of the most potent aphrodisiac in the entire botanical kingdom. Ashwagandha is an "adaptogenic" herb which nourishes nerves and improves nerve function to help your body adapt to stress, one of the common cause of sexual problems. Ashwagandha has been used for thousands of year to treat impotence, premature ejaculation, infertility, and erection disorders.

Shatavari (Asparagus Racemosus): Shatavari is a rejuvenating herb that soothes the body to relieve stress, nurtures the reproductive system, and strengthens and nourishes tissues. It supports proper liver function and metabolic processes to remove toxins from the blood. It enhances the feelings of spiritual love and opens Ojas ("that through which consciousness enters the physiology"). When combined properly with Ashwagandha, Shatavari takes lovemaking capacity to new levels.

Konch Beej (Mucuna pruriens): Konch Beej can improve sexual behavior, libido, and performance. The total alkaloids from Mucuna Pruriens comprise of five alkaloids (purienine and purienidine), are found to stimulate the secretion of testosterone to ensure greater availability to gonads. These leads to increase sperm count and increase testes size. High levels of L-dopa in Mucuna beans has been found to promote fertility and sperm production, and also improve erection, duration of coitus, and post-coital satisfaction after only four weeks of treatment.

Yashti Madhu (Glycyrrhiza glabra) : Yashti Madhu is a Rasayana herb as it helps in revitalisation of human body. It is widely used in Ayurvedic formulations for its aphrodisiac effect.

Vidari - Pueraria Tuberosa (Indian Kudzu): The root of this plant has alterative, aphrodisiac, tonic, stimulant properties which are traditionally used to treat male infertility. It also strengths the nervous system.

Safed Musli (Chlorophytum Borivilianum): Safed musli is rich source of over 25 alkaloids, vitamins, minerals, proteins, carbohydrates, steroid, seponins and polysaccharides etc. A very popular aphrodisiac agent, with no side effects. It is often prescribed for enhancing male potency and overcoming signs of fatigue. It is particularly used for individuals who are suffering from premature ejaculation and low sperm count.

Akarkara (Anacyclus pyrethrum): There is perhaps no herb which can be compared with Akarkara in its effects on Premature Ejaculation. This is world's most effective herbal remedy for Premature ejaculation and is being used in India since ages.

Shudh Shilajeet(Asphaltum): Shilajeet contains more than 85 minerals in Ionic form and Fulvic acid, hippuric acid and many other micronutrients. Shilajeet has that unmatched powers of arresting and reversing the aging process. It also shows anti-oxidant & anti-inflammatory.

Pushpdhanva Ras: This Ayurvedic Rasa shows anti-aging effect on body. It also improves retention time during intercourse. It is a Vitaliser and sex tonic.

Puran Chander Ras: It is a nervine and muscular tonic. It has been useful in premature ejaculation, infertility and erection disorders.

Dosage: One capsule twice a day preferably with warm milk. Shivalik is the another herbal manufacturing unit of RSM group.